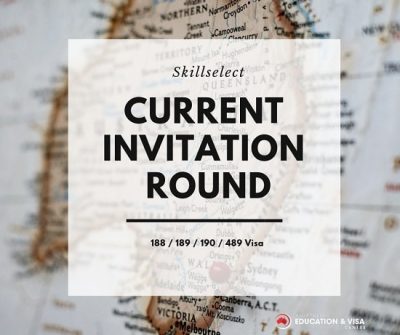 Invitation rounds are anticipated to run on the 11th day of each month. Dates for the rounds are subject to change.

Invitation numbers in each round may vary depending on the number of applications being processed by the department.

Note: State or territory government nominations for Skilled Regional (provisional) visas (subclass 489) will not be impacted.

The table below shows the number of invitations issued in the SkillSelect invitation round on 11 August 2019.

During 2019-20 program year the following numbers of invitations have been issued:

The following graph shows the points for clients who were invited to apply in the 11 August 2019 round.

The highest ranked clients by points score are invited to apply for the relevant visa. For clients who have equal points scores, the time at which they reached their points score for that subclass (referred to as the date of effect) determines their order of invitation. Expressions of Interest with earlier dates of effect are invited before later dates.

Point scores and the dates of effect cut off for the pro rata occupations in the 11 August 2019 invitation round.

Due to high levels of demand, and in keeping with previous years, the below occupation groups will be subject to pro rata arrangements to ensure availability of invitations across the program year.

Australia’s immigration law and visa system are very complicated. Any small mistake can waste your precious time and money, and may even lead to more serious refusal consequences. If you want to know the specific requirements of this visa, or whether your employer qualifies for the sponsorship, please contact our experienced immigration agent to help you.

Paul migrated to Australia in 1999 as an international student. After completing his IT degree at the Queensland University of Technology in 2003, he began his career as an education consultant, going on to become a registered migration agent in 2007. His professional experience covers a range of visa areas, including business sponsorship, skilled migration, partner, parent and student visas.